The latest data analysis from stolen vehicle recovery (SVR) expert, Tracker, reveals that once again more cars were stolen and recovered in London than any other region across the UK in 2020. However, the West Midlands and Greater Manchester move up the league table to second and third position respectively, ousting Essex from second to fourth position. Analysis also reports another annual increase in keyless car thefts, now standing at an all-time high of 93%.

Other car crime hot spots within Tracker’s regional analysis include the home counties Kent, Surrey and Hertfordshire, as well as Lancashire, South Yorkshire and West Yorkshire, further north. Hertfordshire and Lancashire join the top ten for the first time, while Herefordshire and Merseyside have dropped out.

Range Rover and Land Rover dominate this year’s Tracker league table of most commonly stolen and recovered vehicles across the UK.  The three top spots are all Range Rover models - #1 the Sport, #2 the Vogue and #3 the Autobiography. The Land Rover Discovery, Range Rover Evoque and Land Rover Defender also make the top ten.  These six models alone account for 37% of all stolen cars recovered by Tracker in 2020.

Clive Wain, Head of Police Liaison for Tracker, commented: “It is no surprise that London was the busiest region for vehicle thefts and recoveries in 2020 – it always is. The area accounts for as many recoveries as the next seven regions in our top ten, combined. Nor is it a surprise to see Range Rover and Land Rover dominating our UK hot spots.

“However, yet another annual increase in the number of cars being stolen by thieves exploiting keyless car technology should ring alarm bells for everyone, regardless of the make and model they drive. Thieves use sophisticated equipment to exploit keyless technology by hijacking the car key’s signal, typically from the security of the owner’s home, and remotely fooling the system into unlocking the doors and starting the engine. This is commonly known as a “relay attack” and accounted for 93% of all our recorded thefts in 2020. This nudged up from 92% in 2019 but represents a shocking 27% increase in the last 5 years.”

Although lockdown measures in Spring of 2020 saw an overall reduction in general crime figures, Tracker saw vehicle theft shoot up again once restrictions were lifted.  Concludes Clive Wain: “Our July stolen recovery figures were up 50% compared to April and May, so car owners need to be extra vigilant as we move out of lockdown in the coming months.

“We always encourage drivers to use traditional visual deterrents such as crook locks and wheel clamps to frighten off criminals and protect their car. However, in the event of a theft, stolen vehicle tracking technology will significantly help police quickly close the net on thieves and return the vehicle to its rightful owner.”

Tracker is the only SVR provider offering vehicle tracking systems that are supported nationwide by UK police forces. Tracker SVR solutions work like an electronic homing device. A covert transmitter is hidden in one of several dozen places around the vehicle. There is no visible aerial, so the thief won’t even know it’s there. The combination of VHF with GPS/GSM technology, unique to Tracker, makes its units resistant to GPS/GSM jamming, confirming Tracker as a superior security defence against determined thieves. 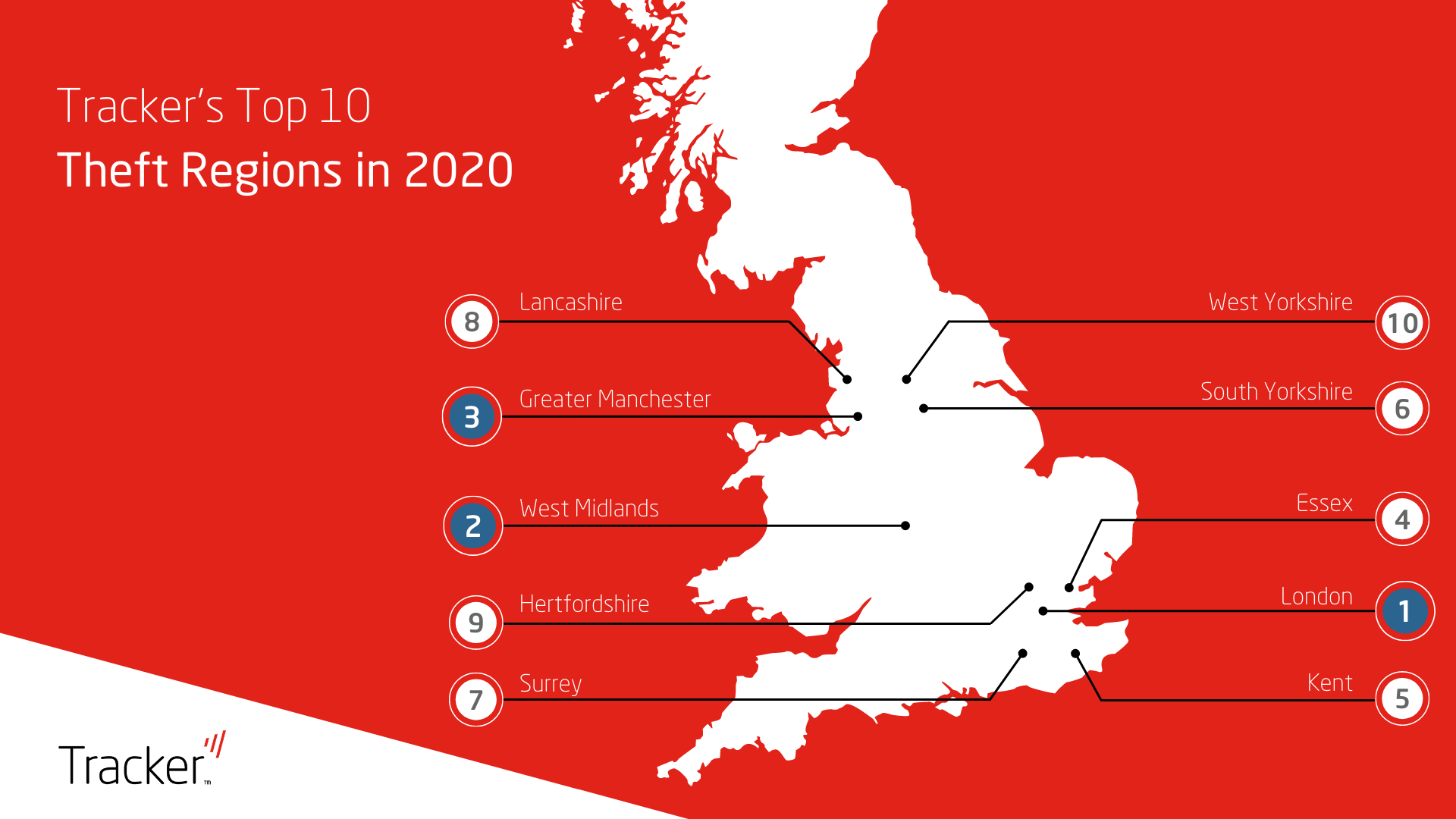